One of my most memorable New Year’s Eve celebrations? Berlin, most definitely. Depending on the day, it wavers between #1 and #2, fiercely competing with London.

During my year in Berlin, I had received a few invitations for private NYE parties, and while they all seemed appealing, they probably were similar to parties I could have attended anywhere else in the world, and that too, on any given night. Silvester, the German term for New Year’s Eve, had to be different and something uniquely German.

A friend from home, who was living in Biarritz, France at the time, came to visit, and he and I both decided that the grand, open-air celebrations at the Brandenburg Gate would be how we would ring in the new year. Celebrating the turn of the year at the Brandenburg Gate was the German equivalent to Times Square in New York City or the Eiffel Tower in Paris, which rightfully would earn us the been-there-done-that kind of bragging right. 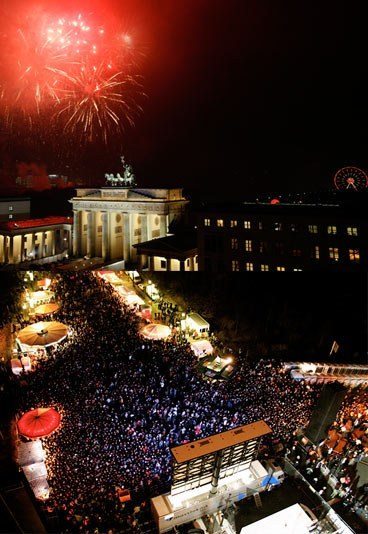 An aerial view of the Brandenburg Gate on NYE (Photo credit: gofeminin.de)

At around 5p, we started our celebrations with a hearty Italian meal at Oliva, a quaint Italian pizzeria located only moments away from my flat in Mitte. The painfully cold walk from my flat to the restaurant, which was only 2 minutes long, was only a small taste of what was to come later. Envisioning the amount of glühwein I would later consume to prevent me from turning into a human popsicle, I had to make sure I loaded up on the carbs.

After a few cocktails back at the flat, we decided to venture out, starting our layering process, one piece at a time. First, the T-shirt, then the sweater, then the jacket, then the overcoat, then the scarf, then two pairs of socks over my jeans, then the boots, then the ear muffs, then the cashmere-lined gloves, and finally, two southern Californians were ready to brave the cold and party the night away in -20°C weather.

Walking to the Brandenburg Gate was an option, considering it was only 15 minutes away from my flat, but we ultimately opted for the crowded S-Bahn train, in the interest of our poor bodies that were still trying to wrap their heads around why we would subject them to such arctic cruelty.

Considering 2009 was the year the city celebrated its 20th anniversary of the fall of the Berlin Wall, we knew the NYE celebrations would be even more epic than usual. And boy, were we right! Events kicked off around 7p with live DJs and performances, loads of food and glühwein stalls, and a distressingly loud fireworks extravaganza that blared throughout the city; it was all a sight to behold. We were lucky to have arrived early and circumvent the rigid security checks because by 8:30p, the 1.2 mile stretch between Straße des 17. Juni and Siegessäule was lined with police officers and jam-packed with what seemed like almost a million people! 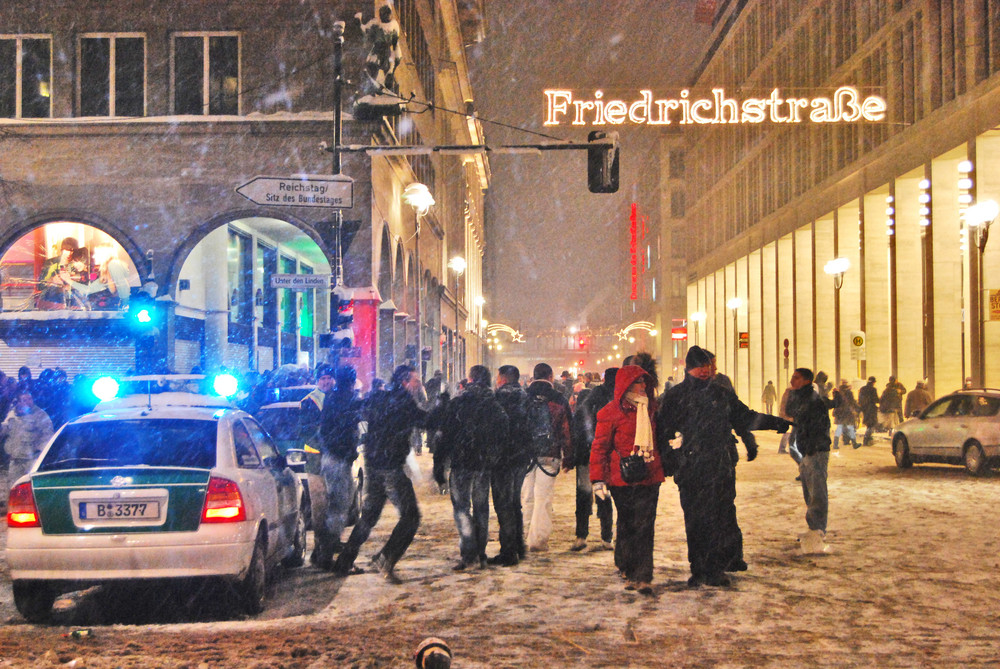 The early hours of the night before the crowd set in (Photo credit: fotocommunity.de)

The streets had exploded into a massive dance party, and any where you’d turn, you’d find someone from a different corner of the world. We met people from Germany (obviously), the US, the UK, Romania, Russia, Italy, France, and I’m sure many other places, but the obscene amount of glühwein clouds my memory slightly. But even in my inebriated stupor, one jubilant German man stands out very distinctly in my mind, not only because he slightly resembled a faun (honesty is the best policy), but because he was virtually wearing no clothes! While the rest of us were huddling as close to each other as possible for body heat, he put all our questions to rest by stating, with arms flared out like a bird, how he felt so free with no clothes and wanted that to be symbolic of how he starts the new year. A big basket of crazy, if you ask me, but I remember thinking: only in Berlin! 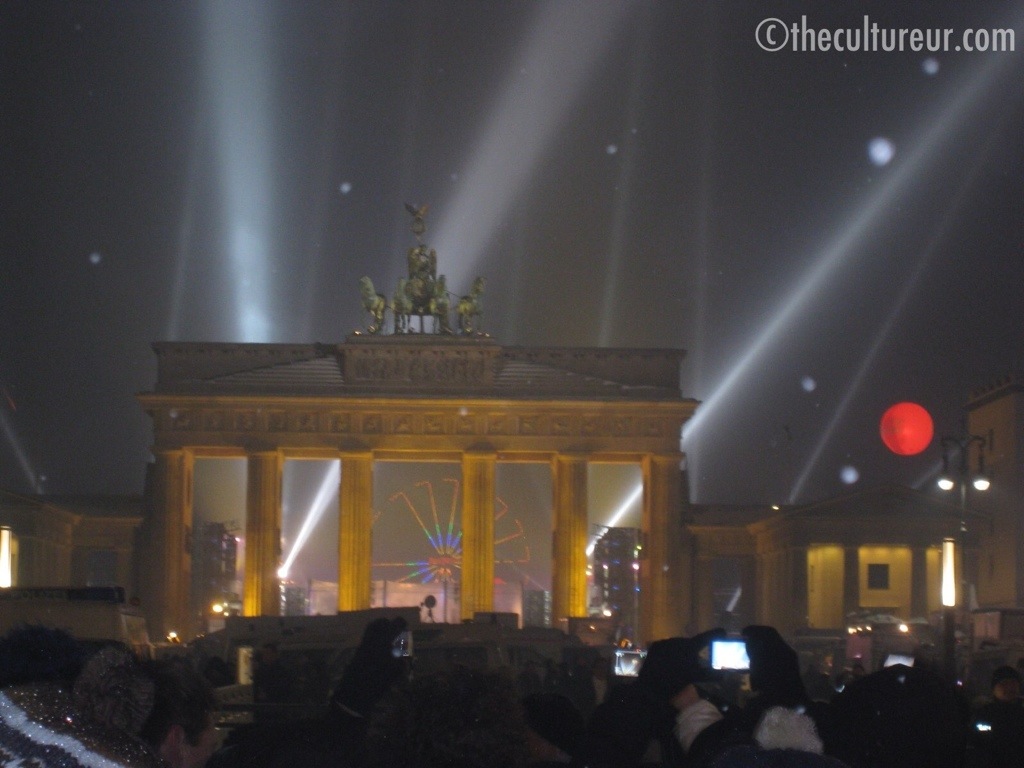 Trying to capture the timely snowfall right before midnight

As the night wore on, my glühwein consumption only increased, and the bone-chilling weather became ever more tolerable. Moments before it struck midnight, in what could only be described as fortuitous, snow gently cascaded down all around us, creating the most idyllic snow globe setting. Before I knew it, the countdown had begun and the roars and chants of the crowd only became louder …5, 4, 3, 2, 1…Happy New Year! Frohes Neues Jahr! 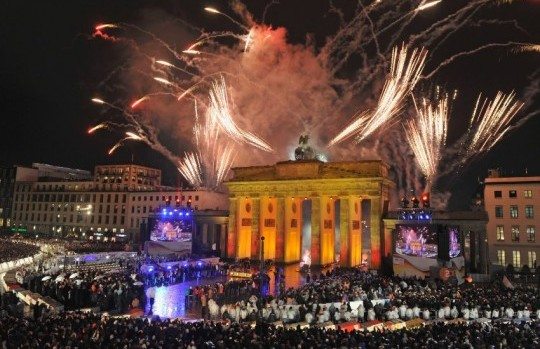 But the night didn’t end there. As people started splitting in all directions from Parisier Platz a little after midnight, we happened to notice a much less rambunctious party taking place in the lobby of the Hotel Adlon. It was a private party, but we successfully sweet-talked the policemen into letting us through the heavily-barricaded area, and entered as the new guests of the ball. Staying true to Berlin’s forgiving nature, our lack of cocktail attire didn’t seem to bother anyone, and we salsa danced our way through the sprawling dance floor and mingled with the guests, as usual. With a glass of champagne in hand and all the right moves, we fit right in.

We danced and danced until…well, the first dawn of the new year started settling in. Leaving the premises, we couldn’t help but notice the stunning glow of the fresh snowfall. We exchanged looks of awe, but no matter how beautiful it was, it still meant only one thing: snowball fight! We even managed to get the police/security officers to join in, but considering how bored they were, it didn’t require much convincing. After hurling mounds of snow at each other and rolling around in the snow like little children, our hands and feet were properly numb and could no longer feel any sensation. Exhausted and freezing, but happy, it was time to call it a night and head home. Auf Wiedersehen, 2009. 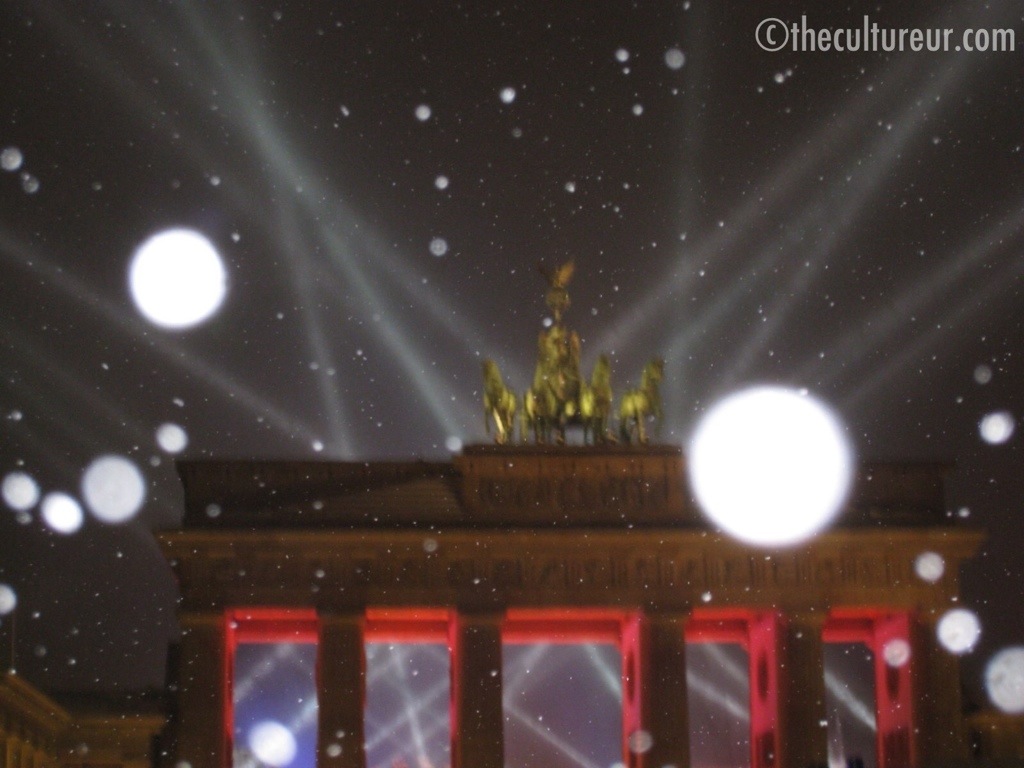 Would I celebrate Silvester in BRRRRRRRLIN again? Oh, you betcha.

P.S. My pictures from that night are total rubbish, but thankfully, my good friend, Google saved the day.