As a University of California student, we were afforded the opportunity to study abroad in virtually any country around the world. I chose India. I spent a total of 6 months in the country, 1 month in the Himalayas and 5 months in New Delhi. After a few initial days of toiling with the Indian bureaucracy in Delhi to make sure we could all stay in the country legally, we were whisked off to Mussoorie to study Hindi and to bond with our 50 fellow study abroad mates for a month. 8 hours later after unpaved roads, crazy drivers that almost killed us not once, but many times, and narrow, windy paths that were barely wide enough for a sumo wrestler much less a bus, we had finally arrived in the Himalayas. That was just the beginning of a wild adventure… 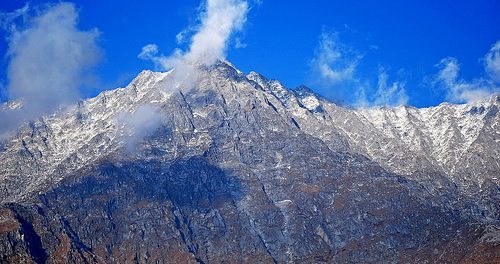 The mystique of the Himalayas

Learn Hindi in the Himalayas

Landour Language School, located at the foot of the majestic Himalayan Mountain ranges is an educational tavern that offers training in a slew of Indian languages like Hindi, Punjabi, Sanskrit, and Telegu. During the first month of my six month study abroad experience in India, we were whisked to the mountainous town of Mussoorie, or more specifically, Landour for a month-long intensive language program that was to facilitate daily life for the remaining 5 months in Delhi. I found the school to be really interactive, charming, and fun. I learned the Hindi script (Devanagri) and learned a conversational level of Hindi. The teachers were all very helpful, patient, and friendly. The focus was on speaking, writing, and reading, and a different teacher for each area. Also due to the size of the classes (my class had 3 people) and the frequency of classes (class everyday 8-12 M-F), our teachers were almost like family. For me, it was a great opportunity to “see” India and learn another language. We couldn’t have asked for a more beautiful setting to learn. The school was a 10 minute walk from our guest house, so very convenient especially when it was pouring (which was every day). 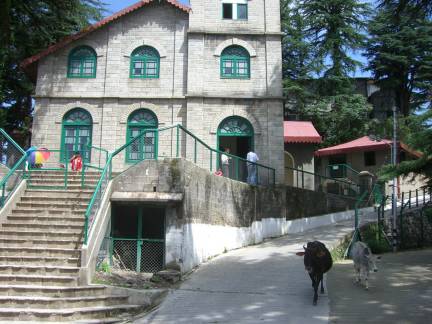 Devdar Woods: Eye-to-Eye with the Himalayas

Ahh, the glory of the Devdar Woods guest house lies in its hilltop location, rather than its service. For a beautiful glimpse of the majestic Himalayan ranges, I can surely compromise on the service and quality. While it’s not the cleanest and friendliest place in the area, it affords the most scenic view of the Himalayas due to its altitude. I stayed here for a month on my 6-month study abroad sojourn in India, and definitely had my complaints about hygiene, lack of water and electricity, and quality of food, but when I would step outside and soak in the mystique of the Himalayas, I would forget about all the flaws of the place. The owners were not the most amicable people, however the hospitality of the staff was unmatchable. They welcomed us with open arms and made sure that we were free of discomfort as much as they could. We went during the month of July, so the monsoons were in full swing and rain poured down almost everyday. There are six rooms in the actual guest house and then some additional rooms up the street in another guest house owned by the same person and manned by the same staff. Everyday, we were sure to meet with some wonder of nature, whether it was a slew of bugs (beetles and spiders to be exact), dogs, or monkeys. In fact, one morning, a dear little monkey became my morning wake-up call when he barged through the flimsy window in our room and started screaming for us to feed him. While at that time, we found it a bit annoying, it later made for amazing stories to recount and intriguing pictures to display. We had all our meals here, and tried to give the chef new recipes to try, and while he wasn’t always successful, bless his heart for always trying to satisfy the palates of 50 crazy Americans. But when hunger calls, you’ll eat anything. As an alternative, we went down to Mussoorie and indulged in restaurant food many times. The town was only a Rs.100 ride from Devdar. 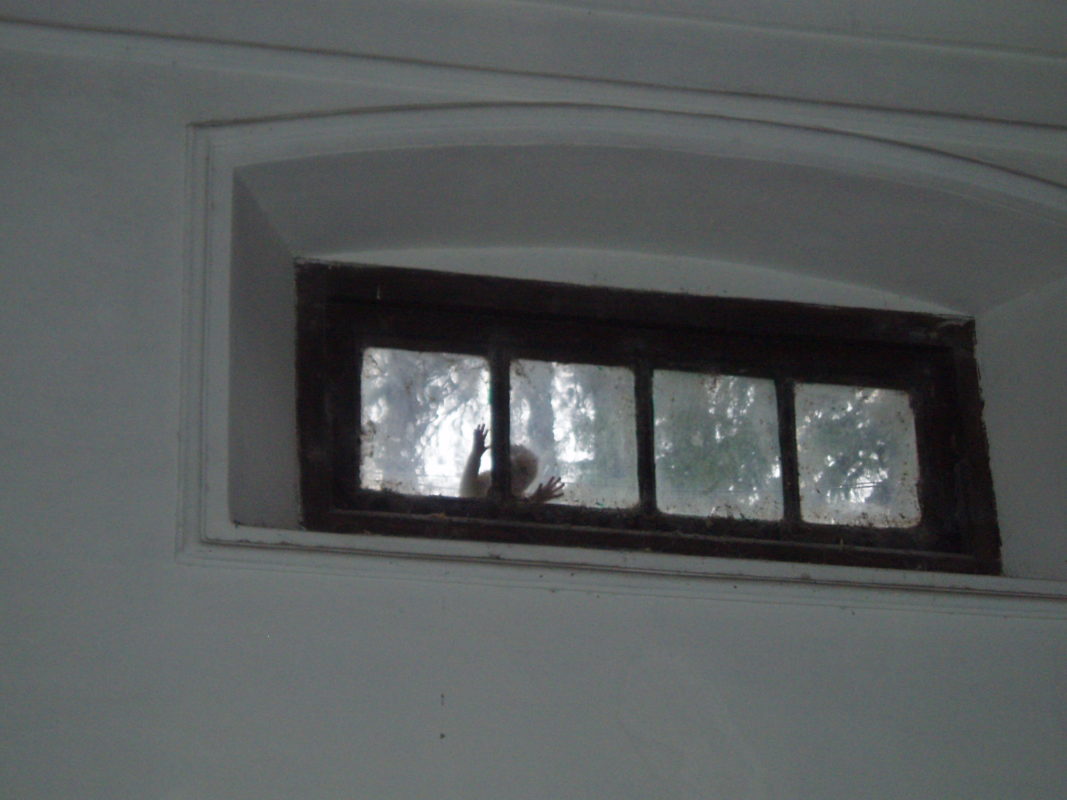 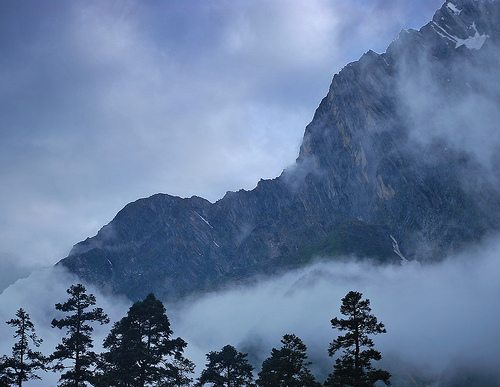 Mall Road: From Picture Palace to the Library

Mall Road is the stretch that extends from the eastern end of Picture Palace to the western end of the Library. It’s the main road of Mussorie. You can find all your essentials from clothes to electronics to food items. There are some really tasty food stalls along this mark that sell some of the tastiest north Indian food I’ve tried. But to ensure optimal levels of hygiene, have the vendor wash the dishes with bottled water in front of you. The street is bustling with foreigners and locals at any time of the day and the stall vendors are extremely hospitable. One thing I would surely recommend is purchasing your Kashmiri and paschmina scarves from vendors here. It’s much more economical than the big cities and amazingly authentic. I remember seeing the same scarf here for Rs. 400, while in Delhi, it sold for Rs. 2700. Most of the times the items are locally made, so you not only enjoy your purchase, but you walk out satisfied that you’re giving back to the community. And also, Bohemian-style jewelry and clothes are extremely popular here and not to mention, very inexpensive. Mall Road is definitely the place to stock up! 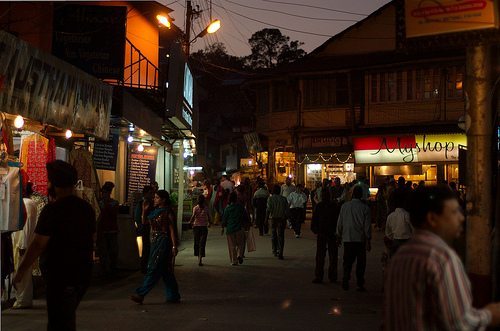 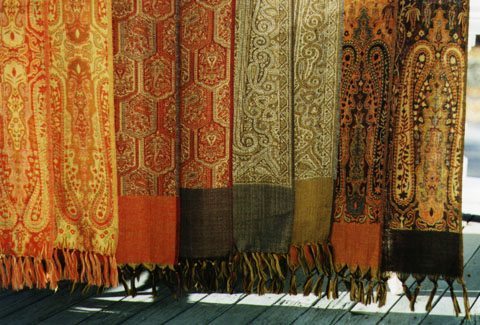 The colorful array of Pashminas made locally

We set out to hike up to Yamunotri just for the weekend. But nature had other plans for us as we got caught in a mudslide that prolonged our stay for 4 extra days. If just one more day had passed, the U.S. Embassy in Delhi would have sent a helicopter for all 50 of us, but fortunately, the path was cleared up and we were free to go. It was unfortunate really; I would have loved for us to head back in style in a helicopter. Imagine the stories that would have ensued out of that…We had already made headlines back in the capital.

Trekking Up to Yamunotri

Yamunotri is the source of the holy Yamuna River that flows through the northern India states of Uttarkhand, Uttar Pradesh, Haryana, and Delhi. It begins at Yamunotri and ends in Allahabad when it merges with the holy Ganges River. It’s a stunning depiction of the beauty of nature, with majestic Himalayan mountain ranges beautifully lining the river stream. We started our journey from Janki Chatti, which is the closest town to start your trek. You have the option of taking horses, palanquins, or being troopers, and walking all the way up the hilly 4-kilometer trail. Bearing in mind that the altitude is way higher than Mussoorie, you may want to make a decision about your mode of transportation accordingly. I had major altitude sickness problems, so I was given two options: stay in my room and rest, or take a horse up. And seeing that a beautiful opportunity to see such pristine beauty would be lost, I opted for the horse. However, due to the unsafe rocky ride downhill, horses are not allowed to have passengers on their backs, so I ended up walking anyway. Well, I am just so glad that I decided to go…I saw some really amazing wonders. At the top of the hill, there’s a Hindu temple that offers one of the most divine views. And the best part of it all is the dual temperatures of the river, one side is scorching hot and the other is freezing cold. We actually saw raw rice being cooked in the hot springs! Already feeling utterly ill, I opted out of bathing in the water, but friends of mine did, upon being convinced it was holy! During our hike, it was raining pretty hard, so we had to be extra vigilant to avoid any slips or falls. The hike took about 2 hours and was so utterly exhilarating, minus the sickness! 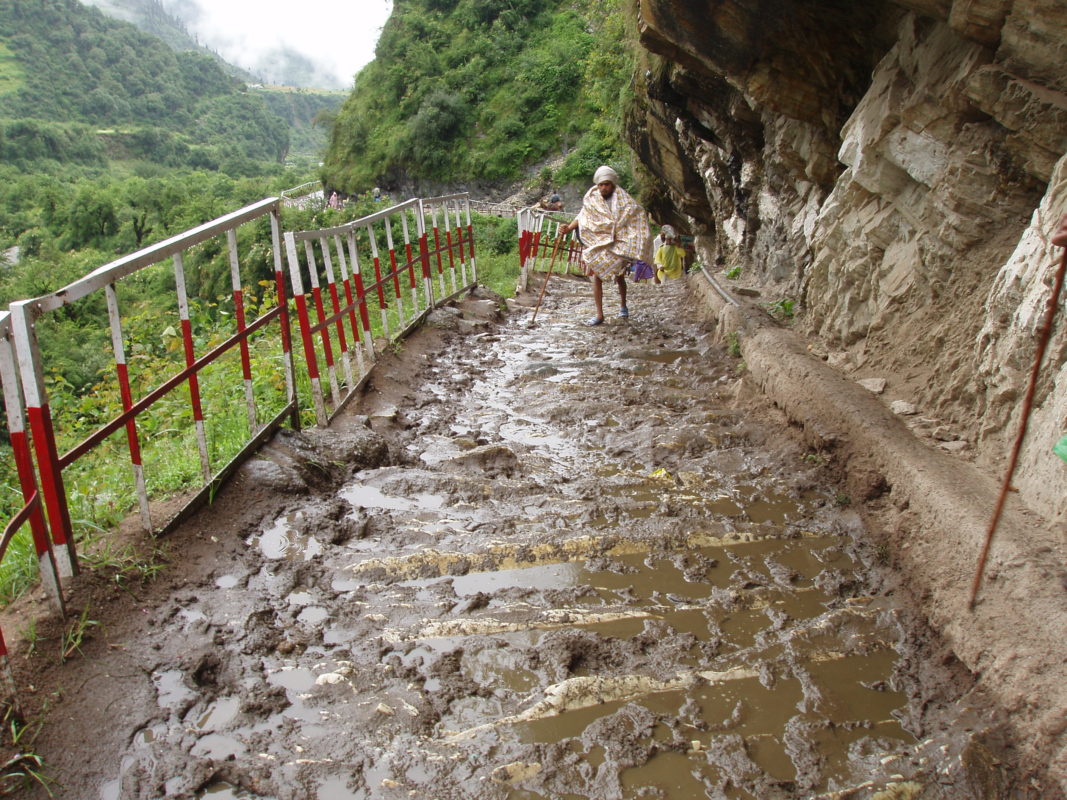 Our slippery trail up to Yamunotri 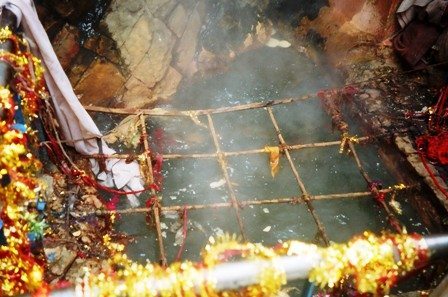 The best area to stay when hiking up to Yamunotri is Janki Chatti. The peak of the river is a four-kilometer hike from here. The town is extremely small and there is a dearth of options for accommodations in the surrounding area. However, we stayed at Ganga Yamuna Hotel. We arrived to a nice warm welcome with a huge sign and tea and cookies waiting for us. While it started off great, I can’t say that the accommodation situation is at par in this town, and it’s completely understandable. We ended up staying 6 nights because of the mudslide, and while all the nights were less than comfortable, there was something amazing about being trapped up in the Himalayas and having nothing to do but bond with people you had literally just met 2 weeks before. We put all 50 of our minds together and came up with more than enough creative ways to keep our boredom levels at bay. The craziest part was that we almost ran out of food, as the village only stocked enough to feed its mere 40 inhabitants. Due to the mudslide, food was unable to be transported from town, so we were very clear about the idea of portion control. More than us, I think the village people were relieved when the mudslide cleared up.

I’d more than recommend the hike to Yamunotri, but know it’ll be a little uncomfortable at times. Bring extra pairs of clothing and shoes, as it remains damp and wet all year long and there are no heating or washing systems. Truth be told, it’s quite a primitive life up there, which has its own charm and value.

The mudslide we almost wish hadn’t been cleared… 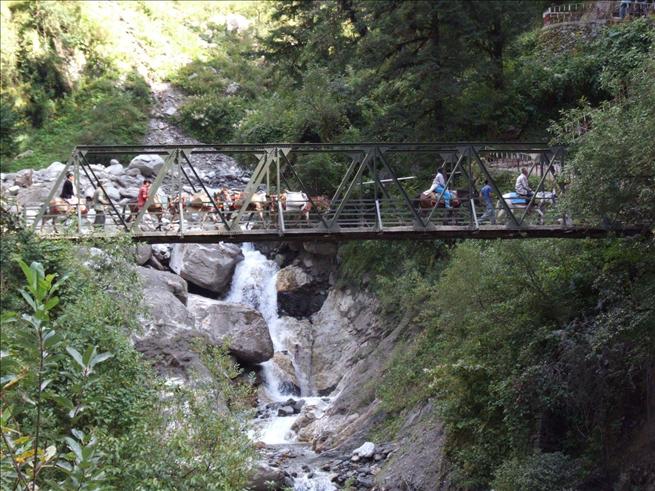 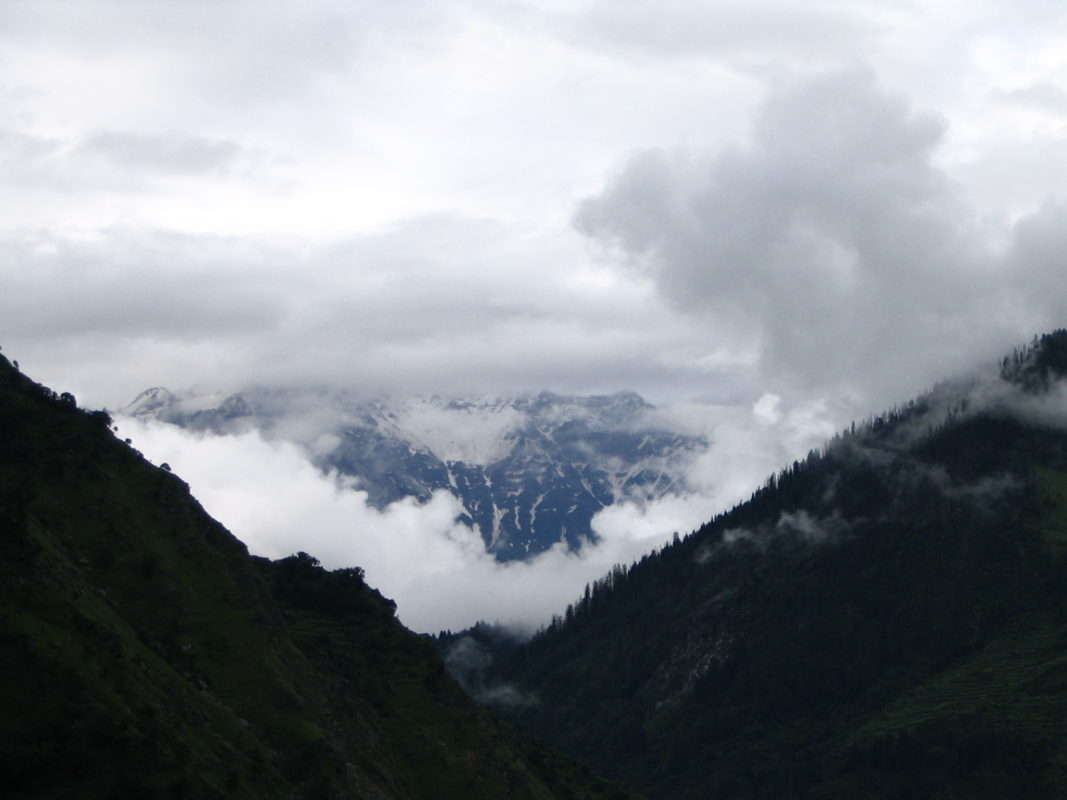 MAGICAL is the only word that comes to mind as I reflect on my experience. I’ll hopefully get around to typing up my entire diary one day.