Women Hold Up Half the Sky: Don’t Criticize Without An Alternative

If you’ve been following me on Twitter or if you’re a fan of Nicolas Kristof, Sheryl WuDunn, Gabrielle Union, Olivia Wilde, Diane Lane, America Ferrera, Eva Mendes, or Meg Ryan, it’s likely you’ve heard the buzz about the new documentary, Half the Sky that just aired on PBS yesterday and today. It’s a 2-part film that explores the idea of turning oppression into opportunity for women worldwide. It was initially a 2009 book written by Pulitzer Prize-winning New York Times reporters, Nicolas Kristof and his wife, Sheryl WuDunn. While I “enjoyed” (I use the term in quotations because it’s hard to fully enjoy reading about 3-year-olds getting raped and girls getting taken out of school just because of their gender) the book, I am glad they employed the power of visualization and turned it into a film. I feel particularly compelled to pen a few thoughts about it as the core ideas of the film perfectly align with my international development/political science background and many of my professional and personal experiences around the world.

Let me start off by saying how unbelievably touching and inspiring the documentary is. The exploration of sensitive issues such as sex trafficking, female genital mutilation, microfinance, domestic abuse, gender-based violence, and girls’ education is no easy feat and requires digging deeper into the entrenched values and belief systems of the local culture. None of these issues are simple in nature or black and white for that matter, so I appreciate Kristof and his wife portraying the information in a riveting and compelling manner, without oversimplifying the issues and distorting the facts. Perhaps, what I like the most about the film is that they are not third-party do-gooders that creep into the developing world and hope to be the “saviors.” Instead of telling the tale of what they did and glorifying themselves, they elect to look at the brave local women who are committed to helping other women in their community. And it doesn’t hurt that they elicit the support and far-reaching voice of celebrities to help spread awareness.

What I don’t like about the film is less about the film itself and more about the provocative media coverage that has tried to liken this movement to Kony 2012.  Straight up, I will tell you that I abhorred the way Invisible Children portrayed their message in Kony 2012. The images were skewed, the motivation was religiously-charged, the facts were distorted, and the “white man’s burden” message caused more harm than good. How it became the ridiculous media sensation that it did, I have no idea. But I can only hope that Half the Sky catches on just as strong. If used correctly, the media can be a powerful force in creating movements and spreading awareness about pressing issues. And it’s only understandable that you’re always going to have a rotten few that taint the rest.

While the message of Half the Sky is a call to help and is both powerful and constructive, it’s important to remember a few things. The main message of the film is not only to open our eyes to another reality out there, but also to start creating change on a local level. It’s not a plea for the white man to go into the developing world and save them all. It’s never worked and it won’t work here. The most effective change comes when men and women locally work to eradicate these problems and change the deeply-rooted attitudes against women from within their society.

I admire Kristof and WuDunn’s work in shedding light on the issues in a profound manner, but that is just the first step. People may question their intentions for doing this, but unless you have a better solution to tackling these sensitive issues, it’s unproductive to resort to criticism.

Key points I hope people will take away from Half the Sky: 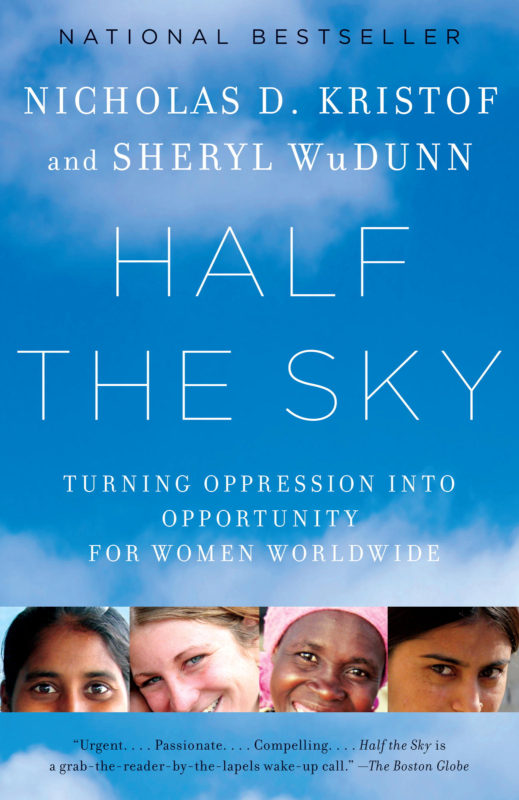 If you didn’t catch the film on TV, it will be available online at PBS until October 8, 2012. I highly urge everyone to read the book, or at least watch the film. If nothing else, it’ll make you grateful for what you have and the opportunities that you had a chance to seize.