Beer, Basketball, and Buick: Welcome to the Final Four in Indianapolis

On behalf of Buick–an NCAA sponsor in its fifth year–I recently attended the NCAA Final Four games of March Madness in Indianapolis, Indiana. For those that are not familiar with March Madness – it’s the biggest college basketball tournament in the United States in which 68 teams from around the country start off, and round by round, compete for a spot in the final championship. The Final Four is the semi-finals of the tournament in which the last four teams duke it out on the court.

As a way for the public to feel part of the competition, people fill out brackets that forecast the performance of their favorite teams and predict the winners from each round. I filled out a bracket this year for the first time ever, and with no real knowledge of basketball and the teams and with a stroke of sheer beginner’s luck, I managed to predict two of the final four teams: University of Kentucky and Duke. I’m certainly not complaining. 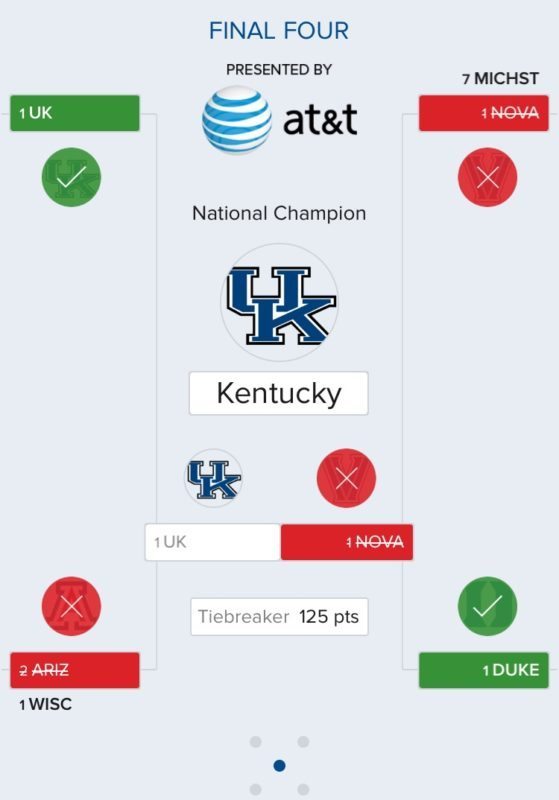 I’m always excited about visiting new places and exploring new U.S. states, but this time around, my perception of Indiana was tainted and skewed by the recent legislation that the state is trying to pass with regard to religious freedom. I wholeheartedly believe in the live and let live mantra, so this left quite a rancid aftertaste in my mouth before even going. While I can’t and won’t condone any of the bigoted legislation, this is one of those moments that I had to consciously take a step back and separate the people from the government. As an American who is not always on board with the agenda of the U.S. government, I get incredibly annoyed when people abroad can’t differentiate between the citizenry and the government, so I wanted to extend the same courtesy to the people of Indiana and try to align myself with the positive forces of the state. With that, I’m really glad I went.

My first introduction to the city was a huge banner in the hallway of the airport that read: “Indy Welcomes All.” Whether or not it changes anything, I was still amazed at how quickly the state and city were able to put together a campaign of such magnitude. Dotted throughout the city were scores of similar signs and notices plastered on store and restaurant windows that read: “This business serves everyone,” reassuring locals and out-of-towners that the agenda of the state is not fully representative of the viewpoints of the citizenry.

Politics aside, the entire weekend was full of contagious laughter, heaps of local culinary delights, and lots of basketball fun. From corner to corner, the city sparkled in all the March Madness glory. I absolutely loved the contagious energy of the stadium during the Final Four games, particularly during the Kentucky-Wisconsin game. While we couldn’t agree on who would ultimately win the championship, no one could deny that Indianapolis knows how to throw a mean party.

Thanks to #ExperienceBuick, this trip was a series of firsts for me: first visit to Indianapolis/Indiana, first real understanding of the new branding of Buick, and first time at the Final Four games. But I’m pretty sure it won’t be my last. 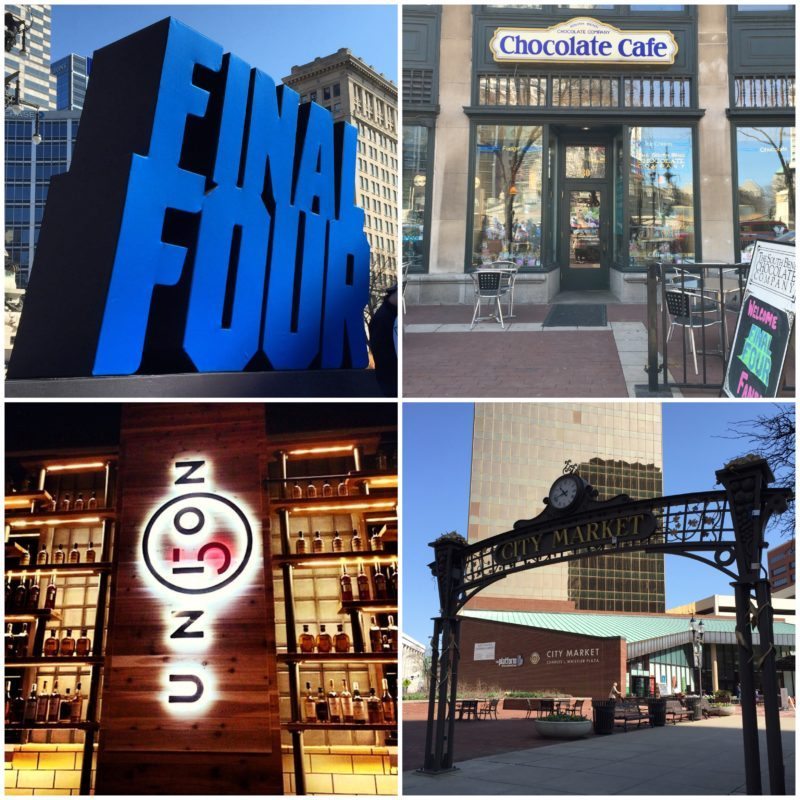 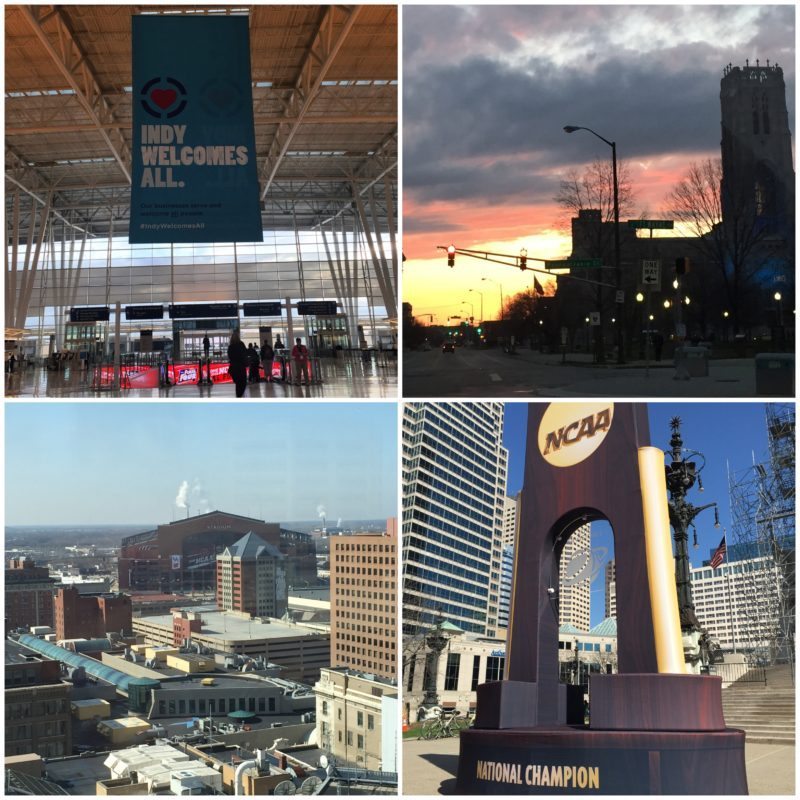 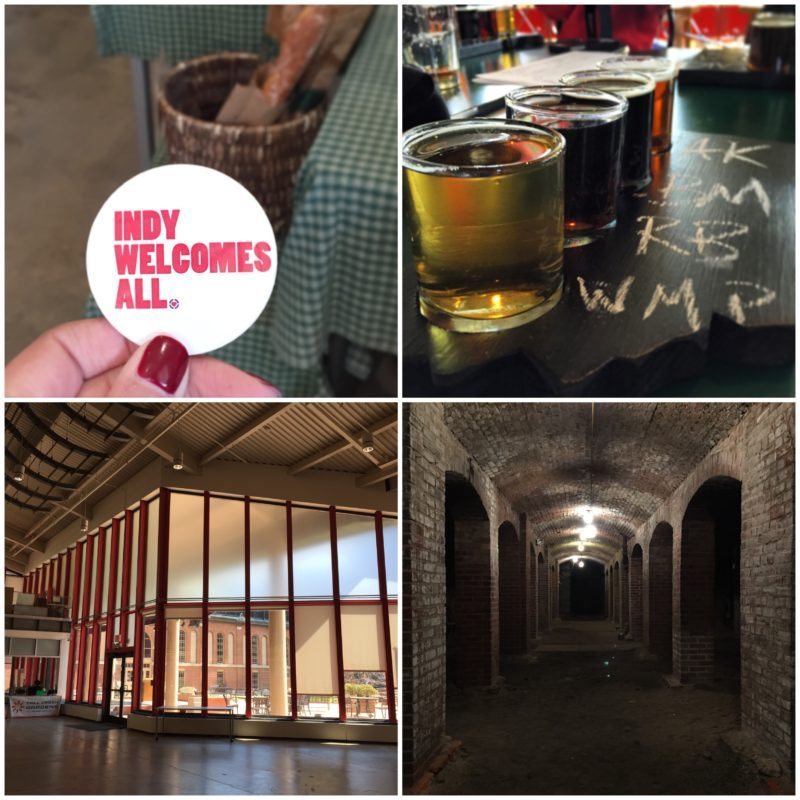 Things to Do/See/Eat in Indianapolis:

–STROLL through the different stalls of the Indianapolis City Market and get lost amidst rows and rows of local delicacies, unique spices and herbs, fresh produce and cheese, and much more. It’s also registered in the National Register of Historic Places.

–LOAD up on local chocolates from the South Bend Chocolate Cafe at Monument Circle.

–PAY homage to the Hoosiers (people from Indiana) that served in past wars such as the American Civil War and the American Revolutionary War at the Soldiers’ and Sailors’ Monument in Monument Circle.

–ENJOY a night on the town with a wide array of cocktails, live music, and good food at Union 50.

–TAKE a guided Catacombs tour through the underground Roman-inspired expanse of brick arches beneath the Indianapolis City Market.

–WATCH a game at or take a tour through Lucas Oil Stadium. Officially home to the NFL’s Indianapolis Colts, it has also served as the venue for NCAA games, the Superbowl, and many more.

–INDULGE in a gourmet dining experience at Spoke & Steele — my favorite restaurant that we went to in the city. The service, food, drinks, and decor were impeccable. Try the Mormon Funeral Potatoes — a delicious blend of hash browns, mushroom creme, and pickled scallions topped with corn flakes.

–ADMIRE the gorgeous architecture and historical landmarks as you walk through the many neighborhoods of the city. Check out the Indiana State House, the Indiana Theater, the American Legion Mall, and much more.

–PARK yourself at one of downtown’s many cafes and people-watch for hours to soak up the city’s local vibe and culture. 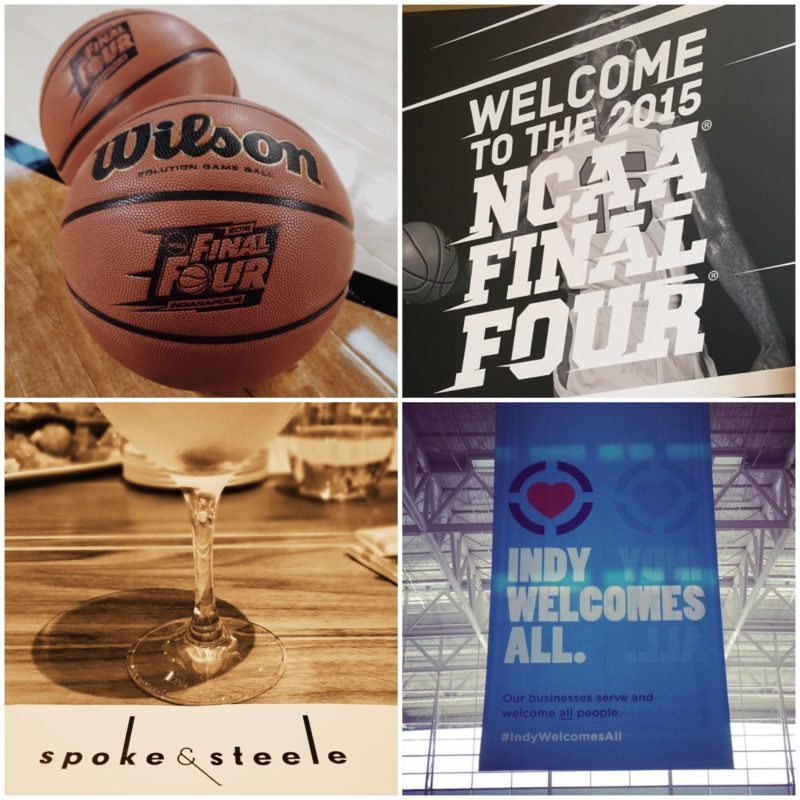 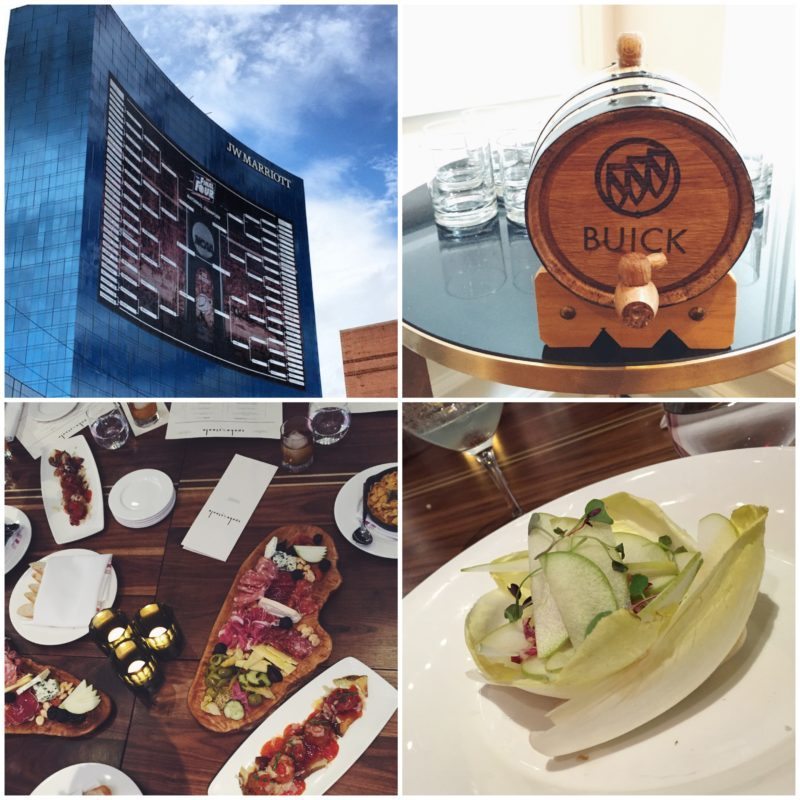 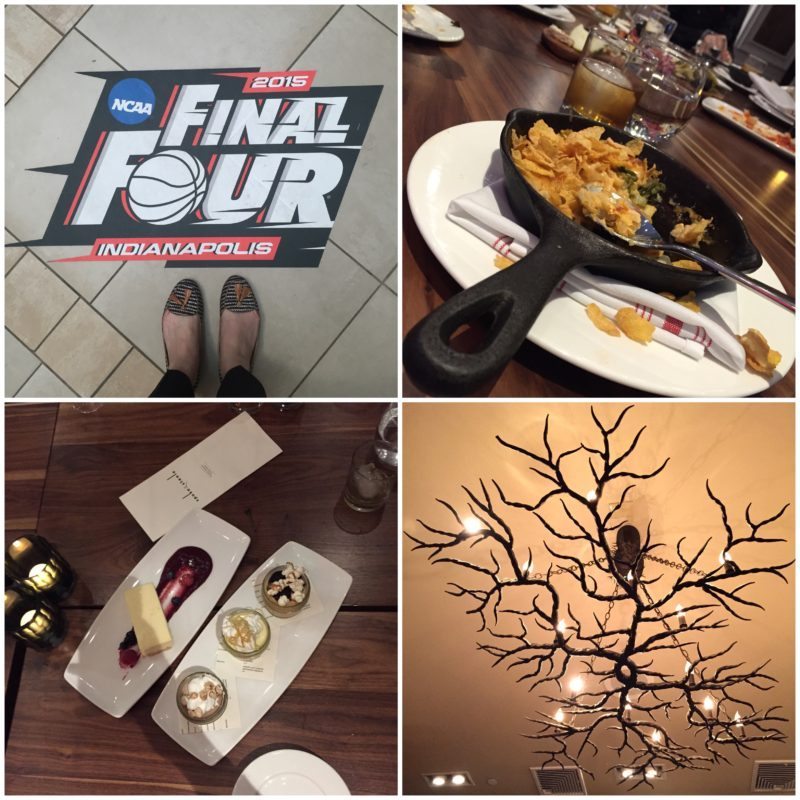 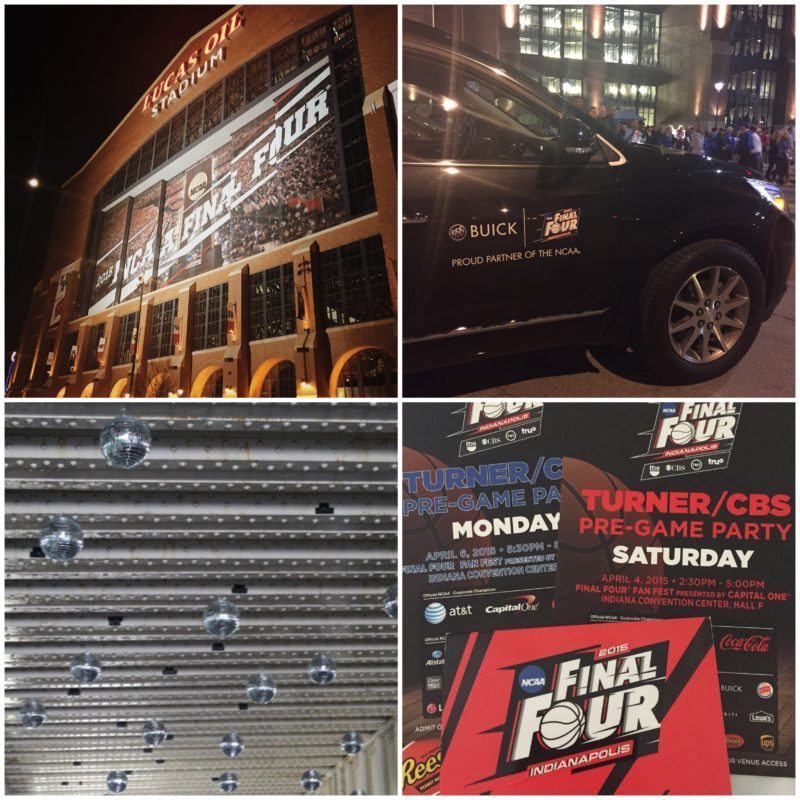 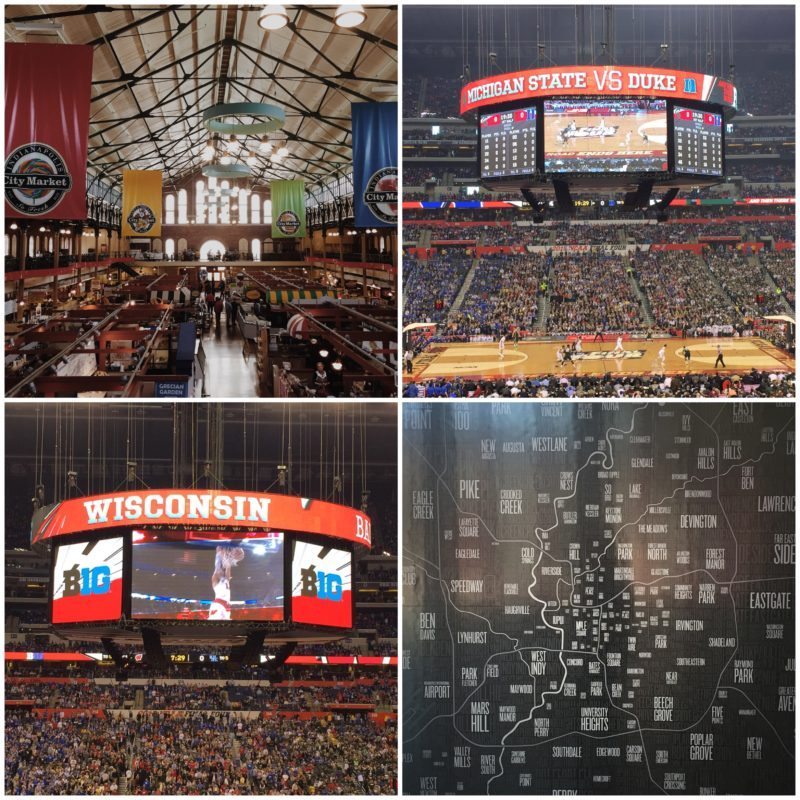 Disclosure: I’m part of the Buick Media Influencer program, but all opinions are my own and accurately reflect my thoughts of Indianapolis, NCAA, and Buick.

Read about my last trip to Detroit as part of the Buick Media Influencer program.