A Spot of Tea, Please: Afternoon Tea in London

“There are few hours in life more agreeable than the hour dedicated to the ceremony known as afternoon tea…from five o’clock to eight is on certain occasions a little eternity; but on such an occasion as this the interval could be only an eternity of pleasure.”

—Henry James, The Portrait of a Lady 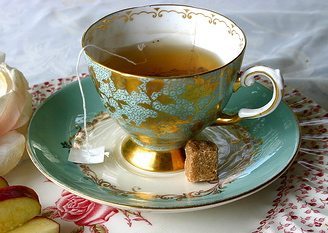 A soothing cup of tea

As one of Britain’s crowning glories, afternoon tea is an indulgent tradition that purportedly began in the 19th century and still lives on today around the world. There are few things that are more quintessentially British than afternoon tea, so whether you’re looking to nibble on a light midday meal, or to familiarize yourself with British customs, you will be hard pressed for choice on venues in the British capital. You will quickly learn that tea is more than just a hot drink for the English. After scavenging around the city for many months, hopping from one afternoon tea experience to another, here are my top 5 favorite picks for the lovely British tradition in London.

The clock strikes five o’clock (more like two o’clock in our modern era). It is time for afternoon tea. It’s our turn to experience “an eternity of pleasure,” as quipped by Henry James. As a social vestige of the Victorian era, afternoon tea is a relatively new tradition—something Shakespeare would have known nothing about, but would have certainly not objected to. The ceremony, as we know it, began in England in the 1840s, when the advent of gas lighting made it possible to delay supper into the later hours of the evening, leaving a gap between the two main meals of the day. And as the story goes, Duchess Anna Maria of Bedford is often credited as the main inspiration behind the idea of afternoon tea, when she started requesting a light meal consisting of finely chopped cucumber sandwiches, platters of small sponge cakes, and pots of freshly brewed tea in the late afternoon to stave off her hunger pangs between lunch and dinner. She even invited her friends to join, making a social gathering out of it. The ritual, referred to as “low tea” back then, rampantly spread throughout Britain and its Empire and quickly became an institutionalized emblem of fine British culture and tradition, establishing itself at the heart of enchanting hospitality.

Though often used interchangeably, afternoon tea and high tea actually refer to two separate meals. High tea is usually the preferred name because it sounds regal and lofty, but it is a misnomer. Originally, high tea was a hearty meal taken by the working class over high kitchen tables, but today, the term is nearly defunct in that sense.

In England, the traditional time for afternoon tea was four or five o’clock and no one stayed past seven. However, today, most tearooms serve tea from two to five o’clock, plus or minus a few hours. The menu has also changed from tea, bread, butter, and cakes, to include three particular courses served specifically in this order: 1) savories—tiny sandwiches or appetizers; 2) scones—served with jam and Devonshire or clotted cream; and 3) pastries—cakes, cookies, shortbread, and sweets.

The elegant ceremony of afternoon tea, so beloved by James is still very much alive and en vogue, though you may hear sharp-tongued cynics declaring otherwise. The sheer number of London establishments offering the lovely British custom is a testament to its thriving nature, so whether your goal is to connect with tradition or to try tea with a twist, there is an unforgettable afternoon tea that will fit your bill. The only question left is: milk or sugar?

1)     The Ritz: Afternoon tea at the Ritz is to Britain as Breakfast at Tiffany’s is to the United States—both culturally iconic. For tradition’s sake, afternoon tea at the Ritz has to be experienced at least once. Just a short walk from Piccadilly Circus (though, given its high caloric content, you may want to jog), the Ritz offers a swanky afternoon tea experience that is a true feast for the eyes. The gilded interiors of the Louis VXI-style Palm Court is delightfully opulent, while the 17 different types of tea and extensive menu is a definite excuse to eat yourself silly. A flute of champagne arrives first, followed by an array of traditional tea blends and a classic three-tiered silver stand laden with warm scones (the best in London!) and clotted cream, savory pies, finger sandwiches, and delicate pastries. You can expect the works—live piano music, waiters in tuxedos, etc.—making you feel like you stepped back in time. With five daily sittings and a formal dress code that is strictly observed—dinner jackets and no jeans/sports shoes—the Ritz is extravagant in every sense. It’s highly advisable to book your table early, which translates to reserve your table more than 12 weeks in advance! Yes, it’s THAT popular. Cost: starting at £42. 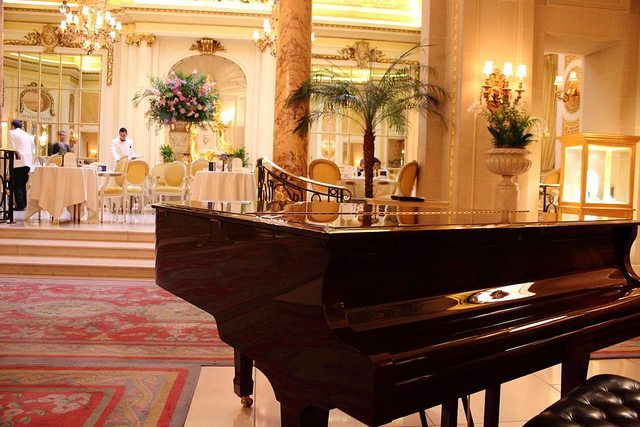 The opulent Palm Court at the Ritz Hotel

2)     Claridge’s: Nestled in the heart of Mayfair, Claridge’s promises a traditional afternoon tea experience with an atmosphere of genteel refinement, unsullied by the whims of our modern era. Normally served amid the Art Deco splendor of the Foyer, Claridge’s afternoon tea offers a choice of more than 40 teas, gluten-free options, delicious crust-free finger sandwiches, fine sweet pastries, and freshly baked raisin and apple scones with Marco Polo jelly and cornish clotted cream. And to top it all off, it’s a two-time winner of the Tea Guild’s ‘Top London Afternoon Tea’ award, the highest accolade in the tea world.  So indulge and splurge, and pay homage to the age-old British tradition. Cost: starting at £38. 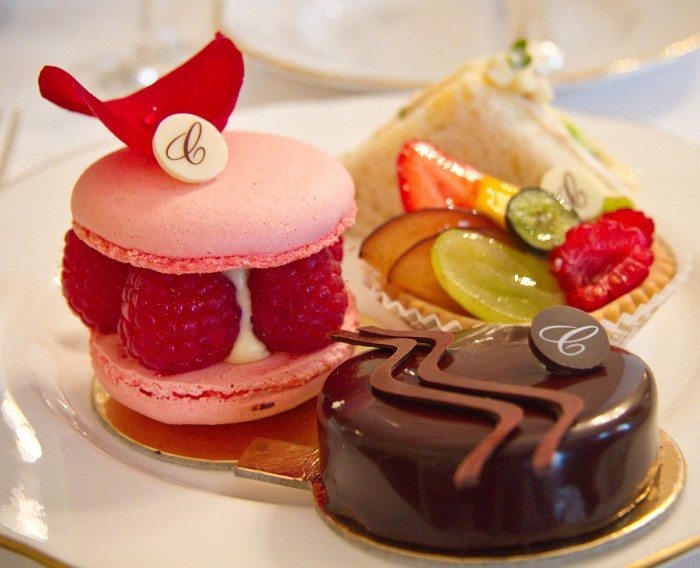 Gluten-free afternoon tea at the Claridge’s 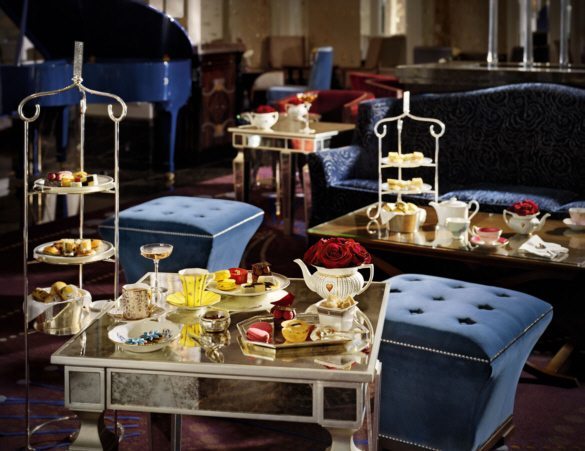 A traditional afternoon tea at the Langham

4)     Berkeley Hotel: The Prêt-à-Portea experience at the Berkeley hotel is calling all fashionistas! The experience, artfully carried out in the Caramel Room, is a real treat and everything is à la mode—literally. The tea menu draws from the latest designer runway looks and replicates them in the form of delicious cakes and sweets. So if you are up for a belted Valentino poppy-seed cocktail-dress biscuit crowned with ruffled purple icing, served on a Paul Smith plate, this is the place for you. Just like the fashion world, the Prêt-à-Portea changes its designs seasonally. So you could be served a Stella McCartney polka dot sponge cake dress one day and a Burberry Prorsum stylish black and white double-breasted chocolate biscuit coat on another day. To top it off, the large array of tea offers a choice from 40 different types of tea from around the world (try the African Amber). It’s the perfect place to people-watch and to see and be seen. The city’s most glamorous and stylish denizens can be seen here sipping a cuppa. High fashion and tea—what’s not to love? Cost: starting at £39. 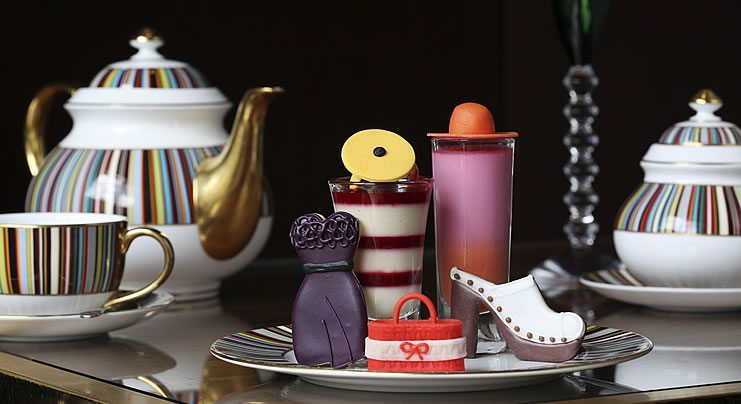 5)     Sanderson Hotel: Experience an indulgence from Britain’s yesteryears with a hint of contemporary flair at the Sanderson Hotel’s Mad Hatter-themed afternoon tea. Food items are real gastronomic adventures—exploding hazelnut praline ice cream lollipops, rabbit’s chocolate clocks, and a rainbow array of finger sandwiches on beetroot, saffron and spinach breads—and carry the advisory label of “Eat Me,” accompanied by whimsical “Drink Me” tagged potions. It’s the ideal option for the spring and summer seasons, as the tea moves to the courtyard garden of the stylish Fitzrovia hotel. The menu is seasonal, so your palette will beg you to tumble down the rabbit hole for yet another taste next season. Cost: £35.

So a dying tradition, you say? I, jolly well don’t think so. Anyone who has spent some time sipping a cuppa with scones while engaging in pleasant conversation at one of London’s many establishments will likely concur. But unlike in James’ day, taking afternoon tea is now more of a special event and less of a daily ritual. But still, there is something uniquely gracious about the etiquette and manners that are brought to afternoon tea that recaptures the romance of the past. And I learned that there are few experiences that will make you feel more British than enjoying a lovely afternoon tea, so go on and ask, in a beautifully mimicked British accent, for a spot of tea, please.